I'm afraid that I've fallen a bit behind with my postings in recent weeks. The main reason for this is the fact that I appear to have bitten off more than I can chew just at the moment! My involvement with the Silvia Nicolatto project has meant that I set up another blog and (something I swore that I would never do) a Facebook presence. What with servicing these - essential for tour publicity - rehearsing and performing with the group, and fitting in time to do my radio show, The Voltarol blog has inevitably suffered. No great loss, some might say, but I enjoy writing it and you don't have to read it so I do intend to carry on as soon as the tour is over and I can concentrate on it for a bit. Having said that, I find myself increasingly posting YouTube clips to my Facebook page which previously would have been posted here. I suppose that is because I want to share the music but don't have the time to write about it at the moment. Next week sees the final leg of the tour, preceded by two days in the recording studio. After that I shall be back to these pages and scribbling away as hard as ever again. Also, I have decided to stop posting playlists from the Radio Programme. If you are interested in anything that I play (assuming that you actually listen to it) then contact me via Facebook or the Source fm's website and I'll happily provide you with all the information about the shows.
Posted by Voltarol at 12:55 No comments:

11. SILVIA NICOLATTO – Curva do 3.10
From the album ‘Alem dos Gestos’ (Besides the Gestures)

Voltarol on the radio again...

I'm finding the evening slot a much more relaxed one than the old Thursday afternoon show - there seems to be much less pressure because mine is the last live show of the day. Mind you, the next few weeks are going to be pretty busy for me as Silvia Nicolatto arrives in the country next weekend and there will be some serious rehearsals, followed by a series of gigs and two days in the recording studio. Nevertheless, I hope to bring you some interesting shows during that period. Here are the details of last Wednesday's show.

Re-released by AVID Jazz in their classic albums series. Double CD with three albums and 7 additional tracks. AMSC949. Under a fiver!

Another re-release by AVID Jazz in their classic albums series. Double CD with three albums and 6 additional tracks. AMSC 1033. Under a fiver!

Music by me lyrics by Silvia. Voice mixed and recorded in by Rodrigo de Castro Lopes, September 2011. Original recording made at the Bunker, Coverack 2001.
Claudia Colmer – bass, Pip Harben – drums, Max Turnbull – piano and me – guitar.

Posted by Voltarol at 14:42 No comments:

New season on the radio...another gig at Hayle

Adventures in the Din Trade - the Radio Show - starts a new season this coming Wednesday evening at 9.30 pm on The Source 96.1 fm. at 9.30 pm. At last, "the late night show that - for your convenience - comes to you in the afternoon" is actually a late (ish) night show. I shall be reviewing some new releases, playing some of my own stuff and generally enjoying myself. If you want to catch the show on line then see 'Voltarol recommends' (right hand side of page) for a link.

On Friday, Que Belo Castelo are back at the Cornish Arms 86 Commercial Road, Hayle TR27 4DJ ‎. Kick-off is at 9 pm so if you can make it we'll be glad to see you!

In the meantime I continue to work on the Silvia Nicolatto project. I have also set up a My Space page which might be of interest to you.
Posted by Voltarol at 16:34 2 comments:

Que Belo Castelo back in Hayle

Yes - they seem to like us at the Cornish Arms in Hayle. Que Belo Castelo are back there again next Friday, August 26th, for another evening of Brazilian, Cuban, Creole and South African sounds. It's the four piece line up ( Kate is still away) and we'll be playing from 9 pm. If you can make it down we'll be very pleased to see you...

Here are some pictures from the gig we did there at the beginning of July. My grandson Josh - a fine guitarist - was staying with my wife and I for the week, so he came down and sat in with us for a couple of numbers.

Posted by Voltarol at 15:10 No comments:

This was my last show until the new series starts on Wednesday 7th September at the new time of 9.30 p m. In the mean time I am busy  promoting the Silvia Nicolatto tour that I shall be part of in September and October. For further details of this see the blog. You may also be entertained - or as likely repelled  - by this impression of me that was drawn  a few years ago by an acquaintance of mine. I came across it the other day whilst I was turning out some old papers... 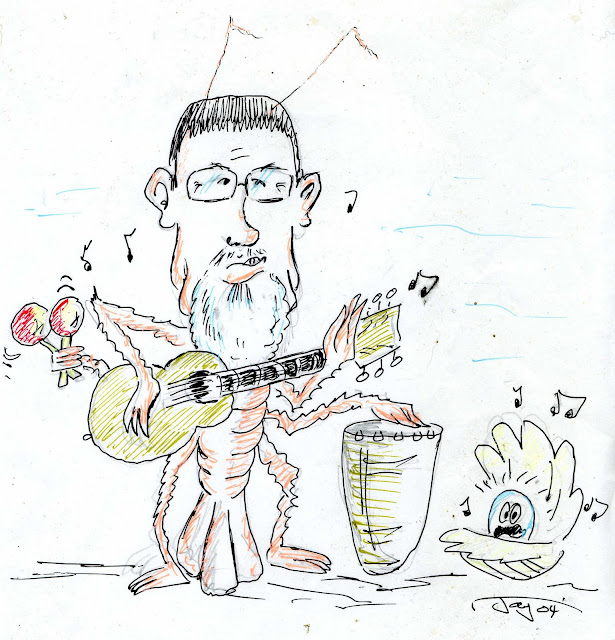 Those of you who listened last Friday will be aware that the show was a repeat of the last week's programme (see previous posting for details. Unfortunately I was laid low by an attack of Lurgy, brought about by side effects of a course of antibiotics. There is an irony in there somewhere but I can't quite put my finger on it at the moment...Next Friday's show (12th August) will be the last in the current series. I'm taking a break until September when the show will return at the new time of  9.30 pm on Wednesday evenings.

You may have notices that the photograph on my profile has made a change for the better. The picture is in fact of the Brazilian singer, Silvia Nicolatto, who I met on my last visit to the country (see Voltarol in Brazil 2010). Silvia will be in Cornwall in September and October and will be performing several gigs in the South West and I shall be part of her band. For the background story and regular updates, please check out this new blog. I will be telling some of the story and playing some of her music on the radio show this week. The first part of the show will be devoted to Choro and Forró. I shall be playing the Silvia Nicolatto tracks in the last half hour or thereabouts.
Posted by Voltarol at 10:03 No comments:

Voltarol
South West, United Kingdom
Voltarol has reverted to his own picture to avoid confusion. I am currently mainly concerned with promoting the tour of Silvia Nicolatto, Pete Kubryk Townsend, Neil Davey and myself. We are a group of musicians from Brazil, England and Cornwall who have come together to create a unique project, mixing influences from our respective cultures. Motto: Music knows no boundaries. If you are still in 'Adventures in the Din Trade',please follow the Silvia Nicolatto link below. As you can see, I have added the SoundCloud player to the blog, so tracks that appear on the 'Silvia Nicolatto and the Anglo - Cornish project blog now appear here as well. You can find the background to these tracks by visiting that blog.

Some of my best friends are bloggers...(and some of them have web sites)